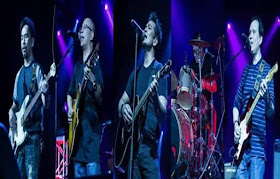 When I moved to Winnipeg in 2010, I spent my first week looking for places where musicians hang out.
I learned that most of them can be found at Jimmy Olais’ basement where they go to share stories and jam about different genre of music ranging from folk, rock, country, blues etc. It was in the basement of Jimmy where I met Jojo Yso, the band leader of Traffikk Jamm.  Since then, everytime I want to have a chat with a fellow musician, I give JoJo a call. If I need a simple set up for a small event or an audio guy, it is usually Jojo who helps me.

Traffikk Jamm, according to Jojo, was formed in 2013.  The group was also part of the event that was organized by the Filipino Music and Arts Association of Canada Inc. (FMAACI ) headed by Ernesto Ofiaza and Jojo Yso as Vice-Chair.  During the First Filipino Folk Music Festival organized in November 15, 2014, Trafficc Jamm performed the best songs of the night, covering the songs of ASIN, Hotdogs, Labuyo and other famous bands.  It was a successful event with about 250 folks attending and enjoying the free concert.

Traffikk Jamm is composed of the following:  Jojo Yso, who plays acoustic and electric guitars and does sound engineering for the group. With his background as a folk singer in the Philippines, Jojo does vocals too. Sometimes, he sings lead vocals, but most of the time, he does the back-up for Arnold Tongol the group’s lead vocalist. I asked Jojo what are some of his influences and he listed the following: Heavy Rock, Glam Rock, Top 40’s, Pinoy Rock, Folk Rock and Folk Music.  He added that his favourite artists are James Taylor, CSNY, Santana, Steve Lukather of Toto and Eagles. It is interesting to note that most of his favourites are my favourites too like Restless Heart’s When She Cries.

Another star of Traffikk Jam is their lead guitarist Erwin San Juan.  “Erwin has played for different bands in the Philippines during the late 80s to 90s. He was the lead guitarist/bassist for the late Paul Toledo, better known as the Rod Stewart of the Philippines. Paul wrote and popularized award-winning songs like Lumba-Lumba, Pasosyal-sosyal, and Babe Come Home to Me and many more of course” (Traffikk Jamm FB page). If you listen to Erwin play the lead guitar, you will be amazed as he can sound like the slow hand Eric Clapton or the lead guitarist of the Eagles when they play Hotel California.

Two more amazing members of Traffikk Jamm are Willie Liwanag the bassist and Noel Marana who plays the drums.  Willie and Noel occasionally do vocals for Traffikk Jamm. Both of them are also famous in the Winnipeg music scene with their own bands for so many years. They were also members of the Mike Hanopol’s back-up band during latter’s concert here in Winnipeg. Well I have a common connection with them. Mike Hanopol stayed in my house when he did a gig in Mississauga, Scarborough and downtown Toronto. I did the front act for Mike Hanopol and Lolita Carbon in Mississauga back when they did a concert on August 14, 2009, dubbed as Papuring Awitin at Musikahan . If I am not mistaken, I think I already met Willie and Noel at the basement of Jimmy Olais during my first few weeks of moving to Winnipeg.

Last but not least is Arnold Garcia or AC of Naked Wednesday Band from Vancouver BC who got a nice tenor voice and who does the lead vocals for most of their songs. AC is also working as an executive for WFG or World Financial Group. AC also helped me in my recording by doing the second vocals for my song You and Me through the Years, which will be a part of my upcoming English album.

I inquired from a classically trained musician, Jose “Bobie” Nepomuceno, of what he can say about Traffikk Jamm’s quality of playing music.  Bobbie commented that “Traffikk Jamm has synergy when they play.  They already have mastered the dynamics of playing.” Bobie added, “As of 2016, Traffikk Jamm can be considered as one of the best in the Filipino community of Winnipeg. The members of Traffikk Jamm are serious in their craft and they are friendly and always grounded.”  Another friend Michael Mostajo, who is one of the finest DJs in the community says, “In my opinion , Traffikk Jamm is a very experienced and well-seasoned  where all the members, including myself, have been in the music business for many years, thus showing it in their performances as well as in their appealing stage presence and choice of music comprising mostly of OPM music, favourite standards and a bit of popular music...In regard to lead singer Arnold Tongol, he is a fabulous singer and stage performer and truly adds to the dynamics of the band as a whole.”

Traffikk Jamm’s repertoire is my favourite. Their music incorporates elements of Classic Rock and Top 40 Music.  This hardworking and dedicated band will make your heart thump and your feet stomp with their energetic covers of famous songs.  They usually sing Manila of the Hotdogs, Tuloy Pa Rin of Labuyo, Aking Awitin by Bong Gabriel/ Side A band, Usok of Asin and Habang Maybuhay of Wency Cornejo and many more.

So what can I say about Traffikk Jamm? When I ran for Winnipeg North as a candidate last October 19, 2015, I cannot forget that Jojo and Arnold helped me out with my fundraiser by providing some musical numbers. Jojo also does music set- up and sound engineering services. He gave me reasonable rates for a poor man’s campaign. When the OPM Legends concert came to Winnipeg on March 14, 2015, I performed with haLf man haLf eLf and Traffikk Jamm as front act. We were the first ones to perform at the Regent Casino Concert Hall. Since then, I have played as front act with Traffikk Jamm for countless times among them were the recently concluded Food-O-Rama at the PCCM grounds last August 6 and 7, 2016 (737 Keewatin St.) and at the 5th Manitoba Filipino Street Festival (MFSF 2016) where around 15,000 thousand folks filled up Memorial Blvd and Broadway Street in front of the Legislative Building. Come August 27, 2016, I will also be a part of the front act for the Traffikk Jamm’s event at the Senior’s Hall at 49 Euclid Avenue.  Another exciting event this October is the Winnipeg Filipino Beer Festival (WFBF), in cooperation with Vocal Arts Centre of Bobie Nepomuceno. Traffikk Jamm will again be featured together with other great bands and guests. Hope to see you all there and we will be singing and dancing to the music of Traffikk Jamm.