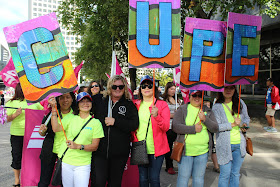 Solidarity: Through Fun and Struggle
Levy Abad - August 23, 2016
I saw Kelly Moist at the 5th Manitoba Filipino Street Festival or MFSF held at Memorial Boulevard and Broadway Street last August 20th.  Kelly is the President of the Canadian Union of Public Employees or CUPE- Manitoba.  CUPE had its tent along Broadway Street. It represents 23,000 public sector workers in Manitoba and 639,000 members across the country. This act of solidarity from CUPE has been evident since the 1st Manitoba Filipino Street Festival in 2012. They were there from the start to support the event and to feel the pulse of the community through fun and struggle to defend workers’ rights. Indeed, there is a time for struggle and a time for fun. I asked Kelly for a brief message and here is what she sent me, “Congratulations to our Filipino community and the Filipino Street Festival in its 5th year! CUPE Manitoba's international solidarity with the labour movement in the Philippines starts here at home in Manitoba, and we are so proud to walk with our comrades in this parade. Long live International Solidarity!” 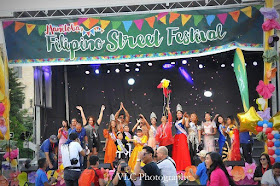 It is amazing that CUPE saw the importance of building relationship by joining such a seemingly “non- political" event but deeply sociological and ideological. By attending MFSF 2016, CUPE was not there to preach, but just to be a humble student of culture and its myriad expression. Here is a community opening up itself to share, give back or to be understood. This gesture reminds me of a line from one of Cindy Lauper‘s song, "I see your true colors shining." This is what my community actually did through the MFSF and CUPE was there to appreciate and experience Filipino culture. Same thing goes for Unifor, Canada’s largest private sector union, with more than 310,000 members across the county working in every major sector of the Canadian economy (Unifor website). Unifor participated in the event where I saw a brother in the Knights of Rizal, Mohamed Alli, together with his brothers in the union.


It felt great to be given a chance to perform at the festival to sing my kind of Blues song titled “Buti Na Lang Nariyan Ka Pa" or It is good that you’re still around to listen and comfort. I can feel the difficulties experienced by our kababayans who are undergoing different kinds of hardship not only because of personal but systemic oppression. It is for this reason that I am thankful for people like Kelly Moist. CUPE, by the way, is a sister union of COURAGE (Confederation for Unity Recognition and Advancement of Government Employees) in the Philippines of which I was a Provincial Coordinator back in 2004 -2006.  As an activist and a singer-songwriter of songs reflective of migrants’ struggles, I really appreciate the time and effort put forth by the leadership and members of CUPE, Unifor and other organizations. 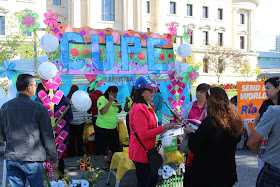 Having been a part of the Manitoba Filipino Street Festival since its inception, I witnessed the growth of the festival through the years. For this year’s celebration, fifty one associations joined and about fifteen thousand were there to experience it. Majority of the Filipinos who went there are not rich people. Most are working class folks whose economic background in the old country is middle class or upper middle class. Most of the people who were there just came from work but did not want to miss the festivity held once a year.

Leaving the old country and severing ties or bonds even for a short period of time is tough, and events like the MFSF afford people the opportunity to come together, enjoy and take a break from life’s worries. The effort of the MFSF to provide a venue for a temporary respite from the trauma of neo-colonialism in the homefront and the pressures of first world capitalism is immeasurable. It can even lead to anxiety and depression. The act of solidarity and immersing oneself to be one with those oppressed and suffering means a lot for people in the diaspora. From the standpoint of  theology of liberation, you must leave the Pharaoh’s comfort, be with the people and be like Jesus, tabernacling in history and launching his merciful deeds of healing while also waging a critique of the status quo.

As I went around during and after the festival, I asked some friends who attended the event and these are the things they have to say about the MFSF:

Bro. Mohamed Ali, a senior member of the Guyanese community and also a member of UNIFOR has this to say, “It is very entertaining and the cultural displays of the event promote understanding and sharing of culture. It is also a way of building unity and solidarity among all communities.”  Josefino “Joe Fino” Rarama Chair of CUPE 1550, representing  Health Science Centre and Cancer Care Manitoba sent me this quote, “The Filipino Street Festival is an excellent expression of solidarity in the  community and I am glad  that I participated in it through CUPE Manitoba. This was my first time to being in the parade.” Arnold Tongol, an executive of World Financial Group or WFG and a member of the famous Winnipeg Filipino band Traffikk Jamm responded, “I am very proud and humbled to be a part of the celebration and be able to show to folks how proud we are as Filipinos.” Bernadette “Dolly” Atillo, a real estate agent of Landmhel Real Service Inc. and also a singer for her part said, “It is this time of the year again where Filipinos from all walks of life get together while reminiscing the ageless Filipino music. One also gets a chance to experience watching local bands trying to relive our Filipino music.” Melanie Wight, former Minister and MLA for Burrows and now working in violence prevention with the Red Cross, has this to share, “I’ve been in every parade and wouldn’t want to miss one!  This year, for the first time, I will be a judge. It is incredibly difficult job as everyone does a magnificent job.” Ingemar Moncada, a friend, texted me his thoughts on the MFSF, “The good thing is, makikita nila kahit paano ang pagkakaisa ng Pilipino at mabibigyan tayo ng puwang upang ibahagi ang ating kultura.” Wow, these are some of the observations that I got from leaders and friends in the community!

What made the festival alive are the different colours that were there. Colours that were meant not only to please the eyes, but more importantly, as the people’s way of expressing their happiness, loneliness, yearning, angst, blues and hope through the floats and tents, dance and songs. The street festival is a good training ground for the youth to lead and organize in the future. The present leadership will fade one day but the context for learning and the goal of unifying our people will always be there. The selfless sacrifice by the volunteers should be given emphasis and exemplified for without their dedication and hardwork, we will not be having this street festival in the first place.